Even if you never have a fire in your own home, you and your family can be affected by a fire. When a fire happens in your neighborhood, or to a family you know, or to the family of a student in your child’s school, it can raise questions and concerns.

Prevention 1st, a non-profit organization dedicated to injury prevention, created After the Fire: The Teachable Moment for parents and teachers to help children ages 4 to 11 and their families cope with the emotions and answer the questions a home fire can create. The program also teaches important fire survival and fire prevention skills by incorporating activities from the play safe! be safe!® program – a fire safety education program for children sponsored by BIC.

After the Fire: The Teachable Moment program is available as a free download from here.

This site provides many tips for preventing and surviving the disaster of a fire in your home. But you need to be prepared for other types of disasters as well, such as earthquakes, floods, hurricanes and tornadoes.

Whether you must shelter in place or evacuate and be away from your home for some time, you should plan and prepare a kit of the supplies you may need, taking into account your family members, pets and any medical conditions or physical limitations that exist. 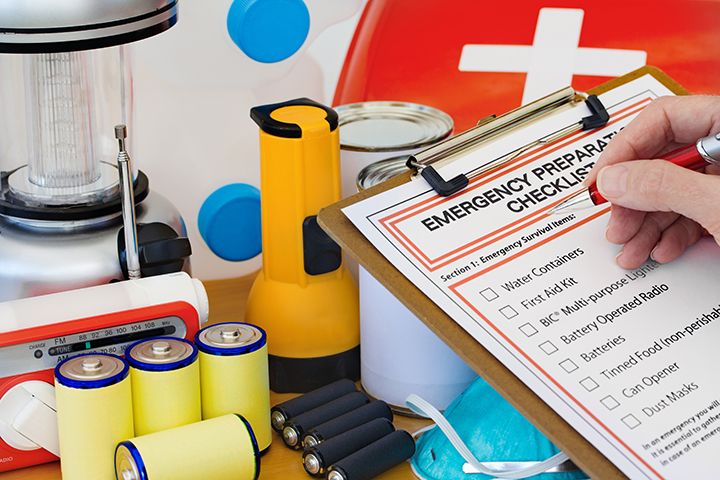 Smoke alarms provide a critical early warning of fire, but getting your family out of the home quickly is just as critical. And that takes planning.

Making an escape plan and practicing it regularly greatly increases the chance that everyone in your family will act quickly and correctly in the event of a fire. 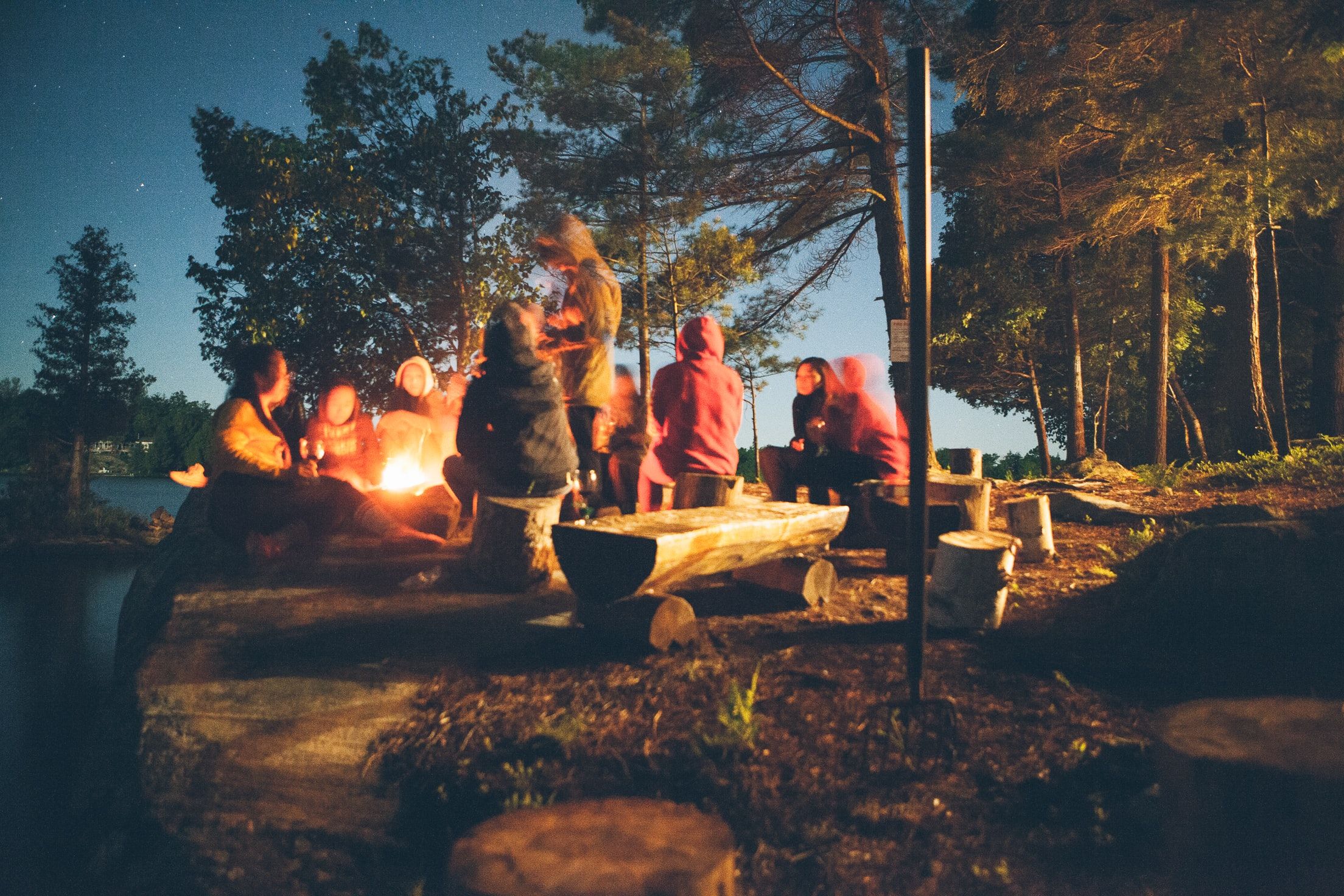 HOW TO MAKE A PLAN

Good escape plans vary from family to family. Every family must think carefully about what each member can do in an emergency, taking into account different ages and capabilities. Most preschool and elementary school children will not awaken to the sound of a smoke alarm. They will hear it, but they have an amazing capacity to block out even the loudest noises. They may, however, awaken easily to the sound of a parent’s voice.

Some family members may wake up, but have physical limitations and need assistance to escape (they may also need to sleep in a room on the ground floor to make escape easier). Still others may have hearing loss. You do not need a complete loss of hearing to be unable to hear the particular sound a smoke alarm makes.

It’s important to think about how you’ll exit from a variety of locations in the house, including every bedroom. If you have an early warning and the main exit routes are clear of fire and smoke, then those would be the fastest way out. But you cannot always count on that.

It’s difficult to predict where a fire might start. So if your main exit route is blocked, it’s critical that you have planned an alternative.

A key element of a good escape plan is to designate a place to meet when everyone is out of the house. Not knowing whether everyone has made it out safely creates enormous anxiety and puts firefighters at unnecessary risk searching for someone in a burning house who is actually outside. Everyone should be taught the critical importance of going to the meeting place and staying there.

Once you are out, do not go back inside for anything. If you open a door or window to go back inside, you let in oxygen. That’s all the fire needs to engulf a room. Stay outside at your meeting place, where you can do the most good by communicating with firefighters. It takes just a few seconds to tell them if everyone is outside and at your meeting place, and about any pets or valuables that may still be inside.

Make sure everyone in your household who is old enough to use a phone knows how to call 911 and is prepared to answer the questions the emergency dispatcher will ask. To get help fast, you will be asked your name, address, phone number, nearest corner to your house, and the reason for your call. Remind everyone to stay calm and not hang up until the dispatcher gives permission. If for any reason questions cannot be answered, keep the phone line open and help will come.

Having a thoughtful plan is a critical first step. Trying it out is equally important. Just walking through your main and alternative exit routes is a valuable reality check. You may plan to exit a window without realizing it is painted shut, or very difficult to open, or too small for everyone to climb through.

Practicing the plan a few times, rather than simply relying on everyone remembering and reciting their responsibilities, makes it much more likely you’ll move quickly and correctly in a real fire. Remembering the details of a plan you have never actually used, especially when awakened in the middle of the night, is very difficult. Having done it a few times makes it much easier to recall.

This is especially true of children. Take a look at this video from homefiredrill.org. It shows that even children who are able to clearly and accurately describe their plan cannot be counted on to follow it when awakened if they haven’t practiced.

Every family needs to review their plan periodically, especially if there are changes in the household. A new baby, an elderly relative moving in, changes to the layout of your home, an injury, or simply the normal aging of household members may call for changes to the way you exit.

An engaging, interactive game demonstrating the decisions people need to make when escaping a fire is available at Help Mikey Make it Out.

No matter how careful you are, fires can still happen. Fires can begin because of old or damaged electrical wiring, malfunctioning heating equipment or appliances, or acts of nature like lightning strikes. To protect your family, you need an early warning, and you need to be prepared to act quickly.

While most fires happen during the day, most fatal fires happen at night while people are asleep. The primary risk in a house fire, especially at night, is not the fire and flame, but being overcome by the smoke. 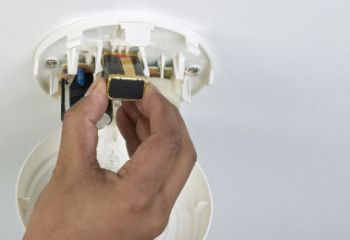 Working smoke alarms are constantly alert to the presence of smoke and provide a critical early warning that will awaken you and give you time to escape.

In addition to smoke alarms, every home should have carbon monoxide (CO) detectors. Carbon monoxide is a poisonous, odorless, colorless gas resulting from malfunctioning furnaces, heaters, generators, improperly vented fireplaces and automobiles left running. Carbon monoxide can build up in a house day or night, and will initially make you sleepy. Dangerous levels of carbon monoxide can lead to explosion, severe poisoning, and even death. CO detectors provide a clear, early warning of the presence of CO and prompt you to leave the house and call for help.

The National Fire Protection Association recommends one smoke alarm on every level of the home, one outside of each sleeping area, and one in every bedroom. Having a smoke alarm inside a bedroom is especially important if you close the door when you sleep. Ideally the alarms will be interconnected so that when one sounds, they all sound.

Having even one working smoke alarm is critical. The largest increase in safety happens between having no working alarms and having one. If you feel that what’s recommended is impractical or too expensive for you, install as many as you can. Almost all local fire departments will provide, and most likely install, smoke alarms if you cannot afford them.

Installing alarms is only the first step. It's just as important to maintain them. When smoke alarms don't work, it's usually because their batteries are either missing or dead. This is especially true of smoke alarms powered by traditional disposable batteries, versus sealed alarms that have long-life batteries that cannot be replaced.

Most frequently, smoke alarm batteries are removed because of nuisance alarms – frequent false alarms. Sometimes this is just the “beeping” of the alarm when its batteries are nearly exhausted. While the low warning could begin at any time of day, it's most noticeable and annoying at bedtime. If you’re tired and can’t be bothered to find a fresh battery, or if you simply don’t have one, you might be tempted to remove the old battery to quiet the alarm. While this does stop the alarm, it also stops the early warning the alarm provides.

Another common reason for removing a battery is the placement of the alarm – too close to the kitchen where burning toast, frying chicken or broiling hamburgers can set it off. While removing the battery is a quick and easy way to silence it and remove the annoyance, you lose the protection. And once you remove a battery it may be a long time before you replace it – if you ever do.

There are two effective approaches to battery maintenance. The easier and, over time, less expensive approach is to replace conventional nine-volt batteries with lithium-ion "long-life" batteries. These batteries should last as long as the smoke alarms themselves.

The second approach is to change the batteries before they wear out. A common practice is to change them when you change your clocks for Daylight Savings Time twice a year.

If the smoke alarm becomes a nuisance because it's too close to the kitchen, moving it will reduce the frequency of false alarms - at least ten feet away is recommended. In addition, having a smoke alarm with a hush button that temporarily silences the alarm greatly reduces the temptation to remove the batteries.

Finally, no smoke alarm is maintenance free. A quick vacuuming will keep dust out of the smoke sensing device. Also, a quick monthly test, by simply pressing the “test” button, will ensure the alarm is working properly.

Despite what many people think, smoke alarms don't last forever. Ten years is the longest you should keep any smoke alarm. It's a good idea to write the date on the alarm when it is installed and replace the entire unit at least once a decade. If your white smoke alarms have turned yellow, it’s very likely they’re older than ten years and should be replaced immediately!

Additional Resources
The links below provide more detailed information on types of smoke alarms, which is best in different locations, proper placement of alarms in basements, hallways and rooms with vaulted ceilings, alarms for individuals who are hearing impaired, and battery technology:

Carbon monoxide detectors should be installed on every level of a house and outside the sleeping areas. They should also be tested every month and replaced when they fail to respond to the test button.

Because carbon monoxide is odorless and colorless, a CO detector is the only way to tell if the poisonous gas is present. Unlike smoke alarms that can go off due to nuisances, false CO alarms are highly unlikely.

CO alarms have a different sound than a smoke alarm. Everyone in the family should be able to hear the difference between the alarms and leave the house immediately, go to the meeting place and call 911 should the CO detector sound.

The links below provide detailed information about carbon monoxide poisoning, who is most at risk, and descriptions of the necessary household maintenance chores that can reduce the risk of exposure to carbon monoxide: